‘It Chapter Two’: How Jessica Chastain Made the Bloodiest Horror Scene Ever | News Line from USA
Breaking News
Families of Aurora Shooting Victims Concerned by ‘Joker’
What would you do with this exclusive North Adelaide renovator?
‘Breaking Bad’ Movie Debuts Tons of New Footage in Official Trailer
‘Uncut Gems’ Trailer: The Safdie Brothers Unleash a Powerhouse Adam Sandler
Skip to content

When “It Chapter Two” director Andy Muschietti wanted to raise the blood quotient for grownup Bev in the sequel, Jessica Chastain was so enthusiastic that she insisted on making it “‘Carrie’ on steroids.” Thus, for the scene where Bev gets engulfed by blood in the high school bathroom stall, the late special effects coordinator Warren Appleby (who died last summer in a tragic car stunt shooting the “Titans” Season 2 premiere) had a record 5,000 gallons of fake blood trucked from Los Angeles to Toronto.

That’s twice as much as the fake blood used for Bev’s (Sophia Lillis) horrifying bathroom sink eruption in the original movie. And, going back further, a lot more than the 200-plus gallons of fake blood needed for the iconic bloody elevator shot in “The Shining.” Not surprisingly, though, the two-minute scene was a nightmare to shoot for “It Chapter Two” cinematographer Checco Varese, who wondered: “How the hell are we gonna do this?”

The answer was building a series of three interlocking sets that became one: “There was a bathroom set that was mostly used when she went in there and sat down,” said Oscar-winning production designer Paul Austerberry (“The Shape of Water”). “And we had a flexible door for the bits when the various tormentors were squeezing their heads through the door. That was the simplest set. We had one of the sidewalls off so you could see her on one side and the door on the other. 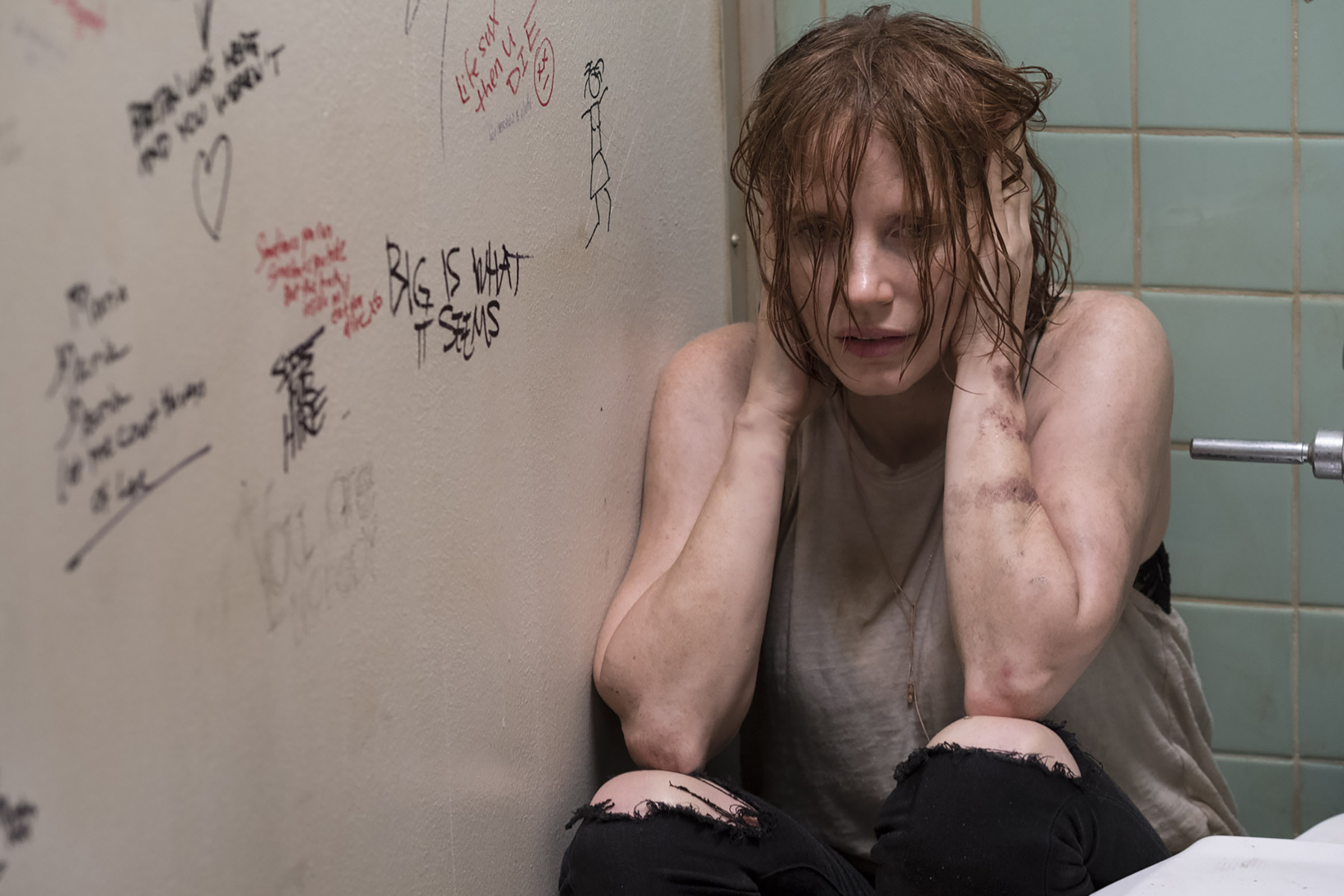 “And then we had a small replica of the bathroom stall for the bloody scenes that had a massive tank with the fake blood above,” Austerberry continued. “It was an elevated reservoir and the pipes were keyed into the flooding tank. It didn’t just fill into the set, it went around it, too, so the pressure was even as the blood rose up.”

They additionally had a final set that rotated 90 degrees with Chastain hanging from a rig. This enabled her to reach out for Jack Ryan, playing Ben, who was being buried alive in the clubhouse set. “She kicked opened the door and the blood gushed down onto the dirt set and she pulled him out,” Austerberry said.

But shooting the scene didn’t quite go as planned for Varese, who used both Alexa 35 and Alexa mini cameras protected by water-proof housing. After doing a couple of takes with a Technocrane, the cinematographer and director huddled around the monitor. Even though Chastain did her part wonderfully, sinking her head in all the way on her own initiative, Muschietti shook his head disapprovingly. “I asked ‘what’s wrong,’ and he said ‘the camera’s not frantic enough,’” Varese said. “And that is the byproduct of having a crane and not having the camera react quickly enough to the movement. 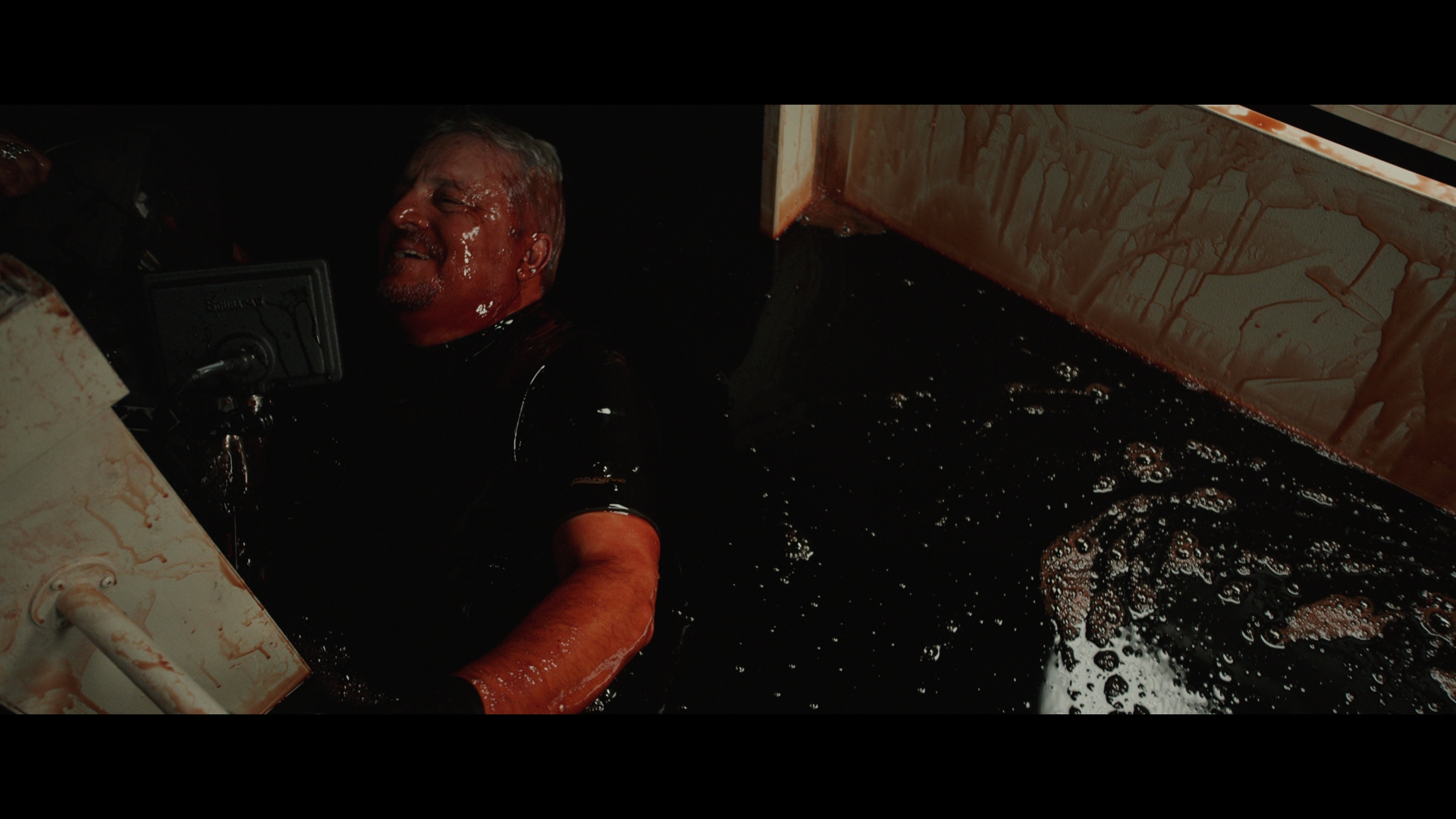 “So I told him to give me five minutes and I went to the camera truck, where I have my wet suit for special occasions,” Varese added. “And I came back and told Jessica if she minded my going in there with her and she said, ‘of course, not.’ So I ended up in the middle of the bloodbath with her, holding my Alexa mini. We shot with three cameras total, and many, many shots were in close proximity with a hand-held device that articulated her fear so much better than a more sophisticated and very smooth camera on a crane.”

They shot all day, going high and wide first, and then jumping to a very extreme closeup, which Muschietti liked best. “Andy’s very tactile and wants to see and touch the frame as much as possible,” the cinematographer said. “At the same time, it has to be realistic enough for the audience to believe that she’s in a bathroom stall. The light had to be a top source, and it had to flicker at a certain frequency, and it is the heartbeat of evil. And Andy is also a musician, so it had a rhythm. So he would tap my gaffer’s shoulder and it would flicker in the digital world to Andy’s will.”

As for Chastain, she looked terrific with the blood matching her red hair. “She’s a very sophisticated thinker and must’ve thought how this should look for the rest of the movie,” Varese said. “So Andy was very happy when she sunk her head in the blood. And she made sure she didn’t look too clean or pretty.”